The 2022 team of six crew members and a team leader – who hail from across the country – trained primarily within the confines of Katmai National Park and Preserve. That was before moving to Denali to end the season in a year that has already seen 3 million acres burned statewide, more than triple the average area burned, according to NPS.

“We’re just thrilled to have the women here this year,” McKee told KTUU. “We are already starting to plan the logistics of having another female crew next year.”

McKee also said the program was a chance for people to see more women in the field of wildfire fighting and to provide those involved with mentorship and support.

“These all-female fire crews allow women to see other women working in the fire, which can help them envision their own opportunities,” McKee said.

The success of a 2021 NPS pilot program – which was based in Yosemite National Park in California and Grand Teton National Park in Wyoming – helped lead the group to Alaska, a state with plenty of options for firefighting training places, to be part of the all-women conservation corps fire team. Currently, Alaska has seen nearly 600 wildfires so far in 2022, according to data from the Alaska Interagency Coordination Center, 68 of which are still active.

“We’ve cut fuels for most of our time here,” said crew member Helene Tracey, who explained that a lot of the work involves cutting down trees and clearing dead brush to help reduce and even prevent the impacts of forest fires. “But we also had a sabbatical where we were in a fire pod and fought the fire in Allakaket.”

Crew training included a variety of classroom and field courses, including fire behavior studies, chainsaw instruction, and incident command system training, as well as a fitness test required as part of the standards set by the National Wildfire Coordinating Group.

“I feel like everyone on this team brings something different, and we’re all determined and strong with different skill sets,” said Olivia Lawrence, also a crew member for 2022. really a great team that can do a lot. We have achieved a lot this season, and just seeing how we can all work together and have such a great experience together has been great.

Beginning in May, the seven women began their work as part of the NPS-hosted team, quickly finding themselves in the wild near and far from other fire crews in the state.

“For about our first week, we camped several miles away from any other crew,” said crew member Sophie Kuehn. “So it was really interesting spending time alone there and then being with other crews and interacting with them, learning from them and making new friends.”

Paige Myers, the team leader, has spent time in Alaska before, but said she had to take up the offer to guide the other six women on the team.

“Leading a crew wasn’t really something I wanted to pursue again,” Myers said. “I was working in Katmai for the Park Service last summer, but when I heard about the opportunity to lead the first female fire crew, I couldn’t say no.”

Along with the work experience, she said, it allowed her to meet all these “great women, meet great people, and build great relationships.” She also said it allowed her to see more parts of Alaska she hadn’t visited.

Although statistics may vary by source, a 2021 report from the National Fire Protection Association shows that only 8% of all firefighters across America were women three years ago. When it comes to wildland firefighters, the data generally shows that women are only a few percentage points higher.

For the National Park Service specifically, less than 5% of those on its park-level wildfire program leadership are women, the agency said. The hope is that her all-female program will help boost the representation of women in leadership roles in fighting wildfires.

“We really want to provide this opportunity for women around the world to see that they absolutely can be part of the wildfires,” McKee said. “It’s not just a male domain.”

You can learn more about the NPS wildland firefighter application process or check out the annual Women in Fire Training Exchange program. 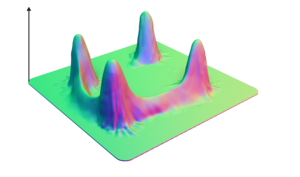